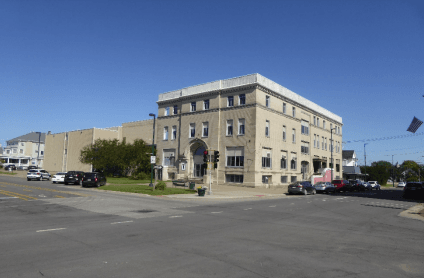 Description of the Project

The original portion of the former YMCA was constructed in 1906. The pool addition area was completed in 1960. The site was utilized as a YMCA until May of 2010. From 2010 to 2020 the property was utilized by the Victory Center to provide transitional rental housing to men in the community. In August of 2020, the City became the owner of the site after the property became a County-held tax certificate due to non-payment of property taxes. The site was officially vacated by January 1, 2021.

The site has not been updated or properly cared for over the last decade and is currently a blighted property in the City's downtown. The building will need a good deal of upgrades to be functional and find new use. The site is currently contaminated with hazardous substances (asbestos and lead) which make it unsuitable for redevelopment without remediation.

The City received an East Central Intergovernmental Association (ECIA) Brownfields Revolving Loan for $250,000, with up to $50,000 of the loan forgivable based on City cost match of 25%. Project Restore YMCA would include asbestos and lead remediation as well as reuse planning to help prepare the building for redevelopment. The City will seek a developer to remodel and redevelop the property. The 1960's portion of the building could either be demolished or potentially reused as a covered parking area. The historic 1906 portion of the building could be remodeled and redeveloped, with commercial business on the first floor and residential units in the upper floors.

Clinton Residents who live in Downtown Clinton are encouraged to attend upcoming meetings held by the Clinton Downtown Alliance on February 17, 24 and March 3, 2022 at the Police Annex, 110 5th Avenue S, all starting at 5:00 pm The general public is encouraged to attend the formal input meeting facilitated by YTT Design and ECIA held at City Hall, Council Chambers, 611 S 3rd Street, 4:00 pm to 5:30 pm on March 15, 2022.